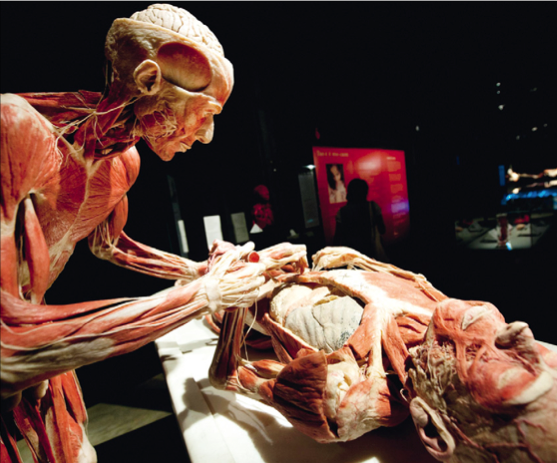 The art of medicine

Spectacular anatomy: plastination and salutary dread In recent years one of the most controversial uses of anatomy for public display has been Gunther von Hagens’ Body Worlds exhibitions. Von Hagens also provoked fresh outrage by selling plastinated human and animal body parts online. While some may consider this as an entertainment activity, or a pretext for commercialising the human body, von Hagens has claimed that “The primary goal of Body Worlds is health education”. As stated by the Institute for Plastination, these notorious exhibitions using human remains to deal with the subject of anatomy aim “to educate the public about the inner workings of the human body and show the effects of poor health, good health and lifestyle choices”. Certainly, more than 34 million people have attended the touring Body Worlds show; among the exhibits they have encountered are a lung blackened by smoking, a cerebral haemorrhage, metastases of the liver, and the harmful physical consequences of obesity. In an interview in 2001, von Hagens put it this way: “The exhibition—and this was intentional—was not a school of anatomy but an ‘anatomy exhibition’, an ‘anatomy experience’, and thus also an ‘emotive anatomy’. The lesson is not didactic. The idea is to convince by example.”